Tony Cullen is still one of the most prolific scorers in Duke’s Men’s Lacrosse history and he did this in only 3 seasons of play. He went on to become the Head Coach at Duke for 9 years and was always ready and willing to give his help and advice to lacrosse coaches on both the high school and collegiate levels, even doing so after he resigned as a coach and started officiating. Many officials in North Carolina were the recipients of Tony’s knowledge and insight into the game. Few if any have had a bigger impact on both the scholastic and collegiate levels of the game of lacrosse and the development of officials in North Carolina than Tony. He never said no to anyone when it came to lacrosse.

Anthony “Tony” Cullen – A True Duke Man
Tony Cullen’s impact on the game of lacrosse in North Carolina is unrivaled to this day.

On April 14, 2002, Tony was part of the inaugural class inducted into the NC Lacrosse Hall of Fame for his outstanding contributions as a player and coach at Duke University, and then as a top official in the ACC and NCAA. He passed away a few weeks later on May 5, 2002 after an extended battle with cancer.

Tony started his lacrosse career at Ithaca High School, graduating in 1975 and serving as a captain his senior year. He was a member of the 1976 Hobart College Division III national championship team as a freshman, before deciding to transfer to Duke University.
During his three seasons at Duke, Tony was known for being a hard worker and a tenacious competitor. He became one of the top scorers in school history and the most honored player of his era. Upon graduation in 1979, Tony tallied 106 career goals and a school record 114 assists, for 220 career points. He set the single game assists record (8), which he still holds today.
Tony led the ACC in total points and total assists in both 1978 and 1979, and led the nation in total points (90) in 1979. He was named an All-American (HM) twice, and selected as a Duke Team Captain and a North-South All-Star game player his senior year. 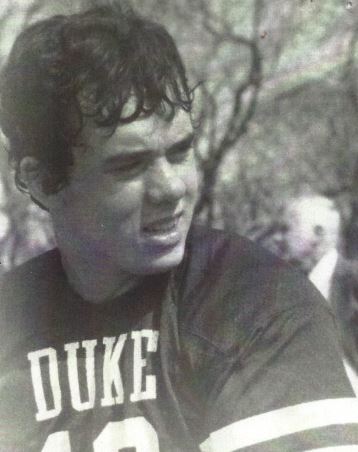 A “True Duke Man” Tony excelled in the classroom as well. He received his BS in Management Sciences from Duke, and later his MBA from Cornell University. Upon graduation from Duke, he spent one year as the head lacrosse coach for North Syracuse High School in upstate New York, before returning to Duke to take over the lacrosse program which was perilously close to elimination. Hiring a very young Tony Cullen proved to be another wise decision by Duke’s legendary Athletic Director Tom Butters.

At the age of 25, Tony was one of the youngest coaches in Division I lacrosse. Aided by his long time Assistant Coach, Don Greeley, he wasted no time revitalizing the program through increased recruiting and superior tactical knowledge of the game. During his nine seasons as Head Coach (19820-1990), he resurrected the program to national prominence and guided Duke to two 11-win seasons, which were the best in school history to date. Overall, he compiled a coaching record 71-54 with the Blue Devils, and was selected as a coach in the prestigious North-South All-Star game in 1989. Tony’s body of work in the 1980s clearly aided the programs successful trajectory.

After leaving Duke, Tony used his business acumen to found a successful communications company that he eventually sold to a major wireless firm. In addition, Tony spent 12 years as a college official and was regarded as one of the best in the nation. Cullen served as an official & head referee in 10 ACC tournaments and 5 NCAA Division I title games. Aside from his work on the field, he did much more behind the scenes to help the game. He mentored dozens of referees who often cite his mechanics and philosophy.

Tony served on the NCAA Rules Committee and worked tirelessly to improve the game. He advocated rules interpretations which sped up the game, and allowed for improved officiating.

Sadly, Tony lost his battle to cancer on Sunday, May 5. He is survived by his wife, Kim and six children: Eamon, Rory, Megan, Kaity Shea, Quin and Ainslie. With the creation of the “Bull City All-Star Game – Cullen Classic for Cancer”, we will have a dynamic way to honor Tony’s contributions to the game; while directly supporting the NCHSAA Tony Cullen Scholarship Fund and the Duke Cancer Institute.